Where Giants Will Stand 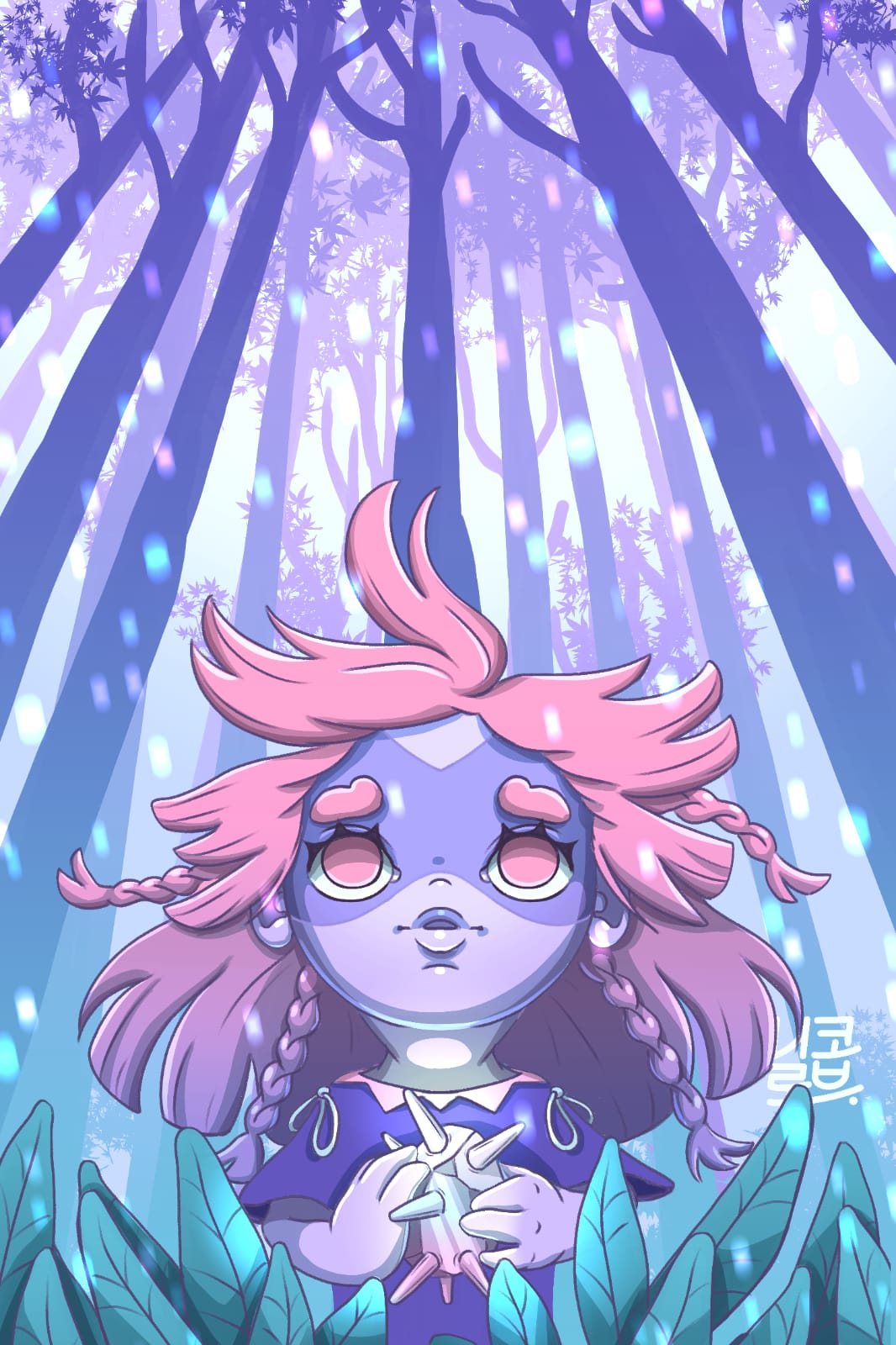 Cora and Rosa caught me in the garden. They rode their bikes under the arched passion fruit vines and into our driveway. I had just finished pruning the tomatoes. Knees achy, I welcomed their timing.

“Hi Grandpa!” Rosa yelled as she raced past the olive guild and the perfumed loquats.

She laid her bike down, hopped a garden bed and smothered me.

“Your grandpop and I made you a present,” I whispered conspiratorially in her ear. She pulled back from the hug expectantly, eyes wide, “Is it for my collection?”

I nodded. Every year we made a different species to awe her with. Last year was a sabertooth cat made of bio-printed ivory. “The Smilodon californicus had teeth 7 inches long and once prowled these very lands.” She had been incredulous. “Nuh-uh”. She spent the summer at the library, nose buried in North American Megafauna.

“Go run inside and get your present. Grandpop is finishing wrapping it.”

“Okay! But Grandpa, guess what?”

Before I could venture a guess, my daughter had reached the garden. “We measured her grove this morning,” Cora said, raising her eyebrows.

It is customary in Arëgrostent to plant a small grove of Coastal Redwoods when a child is born. Her grove was out by the sea, slowly reclaiming ancient sequoia territory from the reign of bovine pastureland. Rosa and her grove were 9 years old today.

“Wow! You must be taking great care of them,” I beamed.

She shrugged shyly. Of course she was.

Grandpop had finished concealing the present and brought it out to the garden. “Why don’t you open it! But be careful,” he warned with an impish smile.

She unwrapped the cloth and opened the box, gingerly revealing an opalescent spike ball the size of her head.

“It’s called a radiolarian. It’s a teeny, tiny sea creature that lives inside a mineral skeleton,” he explained. Its structure was somewhere between a Victorian chandelier and a gazebo made of sea urchins.

“Grandpa, how does it shine in all the colors?” Whit gave us abalone shells from his last harvest and we fed them into the bio-printer.

“Isn’t it wonderful? Abalone shells are made of tiny little blocks all stacked on top of each other like a maze. You know how sunlight is secretly made of all the colors of the rainbow, but when they’re all together you can’t make out any of the individuals?”

“Well, when light enters the maze of the shells, some of the colors get lost and separated from each other. Each color makes its way out at different times, so you get to see them all!”

She narrowed her eyes and brought the radiolaria up to her face as close as she could. “Must be a tiny maze,” she concluded in wonder.

After breakfast, it was time for the big event.

“Okay, sweetpea, your mom and I have decided it’s time you learn the meaning of our town’s name.”

“Mama said you named it.”

“We all named it, together. I just suggested it. Somehow it stuck, even though it was a hack job of Latin.”

“What does it mean?”

“I’ll tell you after we visit the sacred grove.”

“I finally get to go to the sacred grove!?”

“Hmm…. perhaps, if you can name our three sacred callings.”

She stood at attention and recited, “To tend the forest, to hydrate the land, to guide the waters.”

“How do we conduct the Four Tendings?”

“With fire, with pruning, with nourishment, with planting.”

“Very good, and what are the Four Hydrations?”

“And what are the Four Guides to water-tending?”

We are the people of fire, drought, and flood. Every member of our Watershed knew the mantras. Our survival depended on it. But Rosa was born in the cradle of a new era, where survival seemed obvious. She was born to the first generation in decades not to be plagued by the constant threat of war, disaster, and scarcity.

Rosa did not know the bleeding of the world. She hadn’t known the dread that clipped at our heels during the decades of the Great Transformation. She had not seen the hills crowned in insatiable blazes year after year. Her skies had never been as orange as a persimmon, she had never choked on the ashes of her neighbors she could not save. She had never seen her home, the cumulation of all her memories, wash away in a superstorm. She had never known the heartache of the water shutting off, nor the hopelessness of watching your crops, day by day, mummify in the summer heat. She hadn’t known the hunger, nor the fear, nor the grit.

Rosa was born in the year of Drawdown, the year carbon dioxide in the atmosphere had begun decreasing for the first time in centuries. Every year of her life has been milder than the last. Until we welcomed her smiling face in the world, every year of ours had been worse. Each successive year hardening us, challenging us, changing us. We were molded into the people we needed to be. Rosa was something else. Rosa was a child of abundance.

During the year of Drawdown, after a long season of celebration, the elders of the watershed convened. We were weary but we understood vigilance was the price of safety. Having studied the cycles of humanity, we worried about this next generation. Who would these children, who may only ever know abundance, be? What forces did they have to keep them in the right relationship to the land? Would they grow complacent? Would they stay true to the three sacred callings?

We decided to construct three temples to remind our children of what sustains us, and with each temple, a ritual to indebt the heart to their sacredness.

“Final question. Rosa, what do the three temples help us remember?”

It was a long ride to the grove. It’s what brought my husband and I here to begin with all those years ago. Of course, it almost burnt to the ground the year we moved, and many years since. But there it still stood, through luck and the power of community, the most southern grove of old-growth sequoias remained regal in its creekbed.

We parked our bikes a mile from the grove. I held Rosa’s hand the whole walk there as she skipped and squirmed, but as we drew closer she steadied into a slink. The Grove can have that effect.

We walked through the gate, and Rosa was stunned. She had never seen trees so large or so old. Many of the trees in the watershed were nearly as tall, but none even half as thick. We decided, in that meeting long ago, that nine was the right age to introduce our children to the grove. It was deemed an impressionable age, and an age at which a child begins to set the stage for their life’s direction.

She walked in a daze, naturally drawn to the oldest tree in the grove as if by spiritual gravity. She placed her hand on its rusty bark and lulled her head back in reverse vertigo.

She thought about it for a moment before simply letting out a, “Woah.”

She wanted to know more. “Does she have a name?”

“She did once. But we no longer name individual trees. The unit of a forest is a grove.”

“Well, what was her name before?”

She scrunched her face. “That’s a silly name. Who was that?”

“Rosa, do you know why we don’t name beings or places after people anymore?”

“Because places and beings don’t belong to us. It is us who are indebted to them.”

“But what about people who are really, really good?”

“Why don’t we want to remember them?”

“Because people will run around all day trying to figure out what will make them commemorated. Because no one ever does anything alone, the unit of a forest is a grove. Because we have to remember we are not immortal, and that no plaque or street or tree with our name on it will change that.”

“Our legacy is the land,” she repeated softly. Something clicked in her, “Did Arëgrostent used to be named after someone?”

“Yes.” I momentarily dodged the question, “It’s first name was Ceola. It meant: the shady place. This land was so dense with ancient trees, the Pomo people only visited in the summer when they needed to cool off. Then the Europeans came and gave it a different name.”

“And named it after someone?”

“Yup, they called it Guerneville. It was named after a Swiss man.”

“Why’d they name it after him?”

“Because he owned the sawmill in town.”

Most of our lumber came from the bio-printer these days, it could grow any shape of wood from a brick of compost. We pruned our trees and the microbes in the printer turned our clippings into lumber. We had little use for a sawmill outside of the occasional wind-felled tree.

“They named it after him because he made the most money cutting down the most ancient trees.”

“You mean ones like these?” She flailed her arm in an arc.

“Even bigger ones. Older ones.” I said softly. “They cut down so many trees that for years our home was just known as Stumptown.”

She looked about on the verge of tears. Sometimes the heart was like a bone; you had to break it to set it right.

“You can cry, sweetheart. But just know, we won’t let that happen again.” She stared off into the distance, letting her tears flow bravely.

“You want to know what Arëgrostent means?”

She looked up at me hopefully. Her eyes were two twinkling stars.

“We thought about calling it Arëgrosted-Arëgrostent, but it was too much of a mouthful. We settled on just Arëgrostent.

“What does Arëgrosted mean, Grandpa?”

I held her hand a little tighter.

“Where giants will stand.”